Hidden Yardage and the Chance of Scoring: “The Battle for Field Position”

Did you know that a team’s percentage rate of scoring can be directly affected by their field position when starting a drive?  It is important to answer the next question correctly:

How many teams are on a football team?  Yes, I worded that correctly.

Did you have to stop and think about it?  Is your answer automatically one team or are you still thinking I didn’t word it correctly?  The answer is not one team, it is three teams: Offense, Defense, and Special Teams.  Special Teams is an important part of the team and is 33.3% of the game.  However, it is usually overlooked during practice since the focus is primarily on the Offense and Defense.  I am not suggesting a coach needs to spend the majority of practice focused on Special Teams but I am saying it is important enough to find time to squeeze it in.  If a team is really bad at Special Teams and the opponent is really good, it can change the outcome of a game.

A wise coach once told me, “Why bother punting if you can’t even execute all the facets of the punt team?  Just do a quick kick with the QB.”  I have found this to be very true because if your team can’t long snap or punt then why are you even attempting it?  As a coach, you are just setting your team up to fail before they even snap the ball.

The chart below says a lot about a game!  The closer a team gets in someone else’s territory, the higher their percentage is of scoring points.  If a team can score points on every drive then that is helping out their defense and special teams during the game. 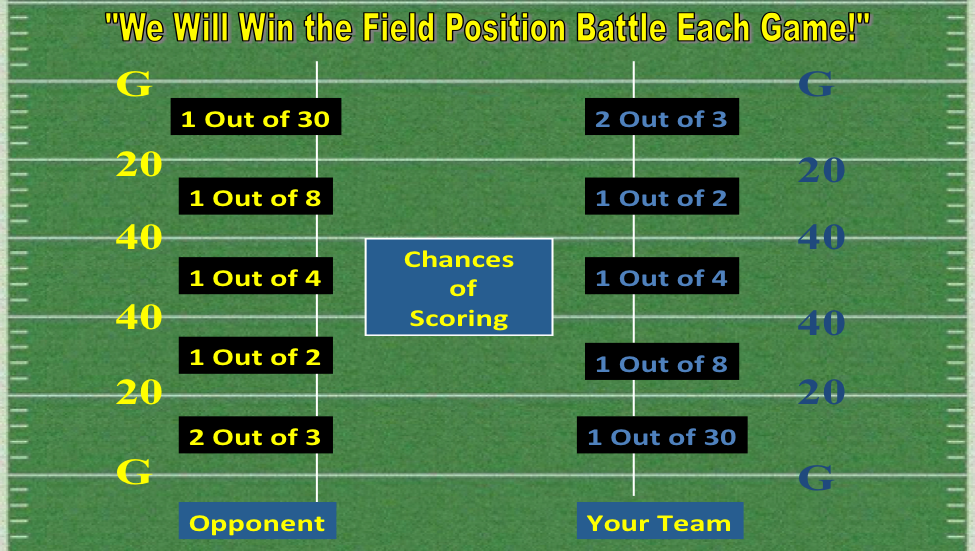 Having a good Special Teams can change the outcome of a game.  One piece of advice I will share with you is to make sure you make it K.I.S.S. because if you don’t then it will be more time you need to spend in practice on and off the field.

Frank Beamer, formerly of Virginia Tech, said that “hidden yardage” must be AT LEAST +20 in YOUR favor!  This is a term in football that coaches use with different meanings.  His reference to the term is actually precise because hidden yardage is the definition of adding up kickoff yards, kickoff return yards, punt, and punt return yards.

This is not a term you typical hear on the sideline during a football game. It is a term that coaches use when discussing the possible “Maybe” outcome of a game.

The following are a few things I learned about special teams (a long time ago) that helped me be a successfully Special Teams Coordinator:

Football is like a lot like Chess, there are many moves or plays you can choose but the key to winning is in the strategy.  For Example, the King is the QB on a Chessboard which relies on the many different chess pieces to accomplish one goal: Victory!  Teams are faced with the same challenge at every game: they have 3 downs to get 10 yards.  If they aren’t able to move the ball they have a choice to go for it on 4th or kick the football away. The difference is now you know what your chances of scoring are based on your field position. 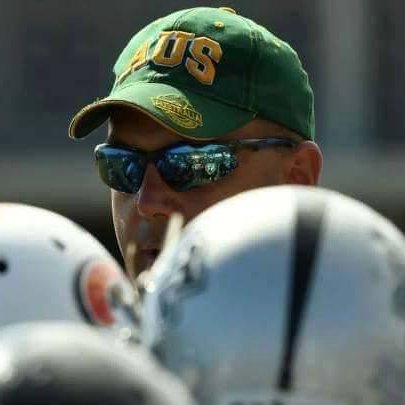 Anthony Stone is a Physical Education teacher in Rockford, IL and Quarterbacks Coach at Boylan High School. He was the Defensive Coordinator and Assistant Head Coach for the Women’s Australian National Outback 2017 Team and writes blogs for Firstdown Playbook and Hudl.  Coach Stone is presenting physical education games at IAHPERD in St. Charles, IL – November 16-17, 2017.  He recently published a Physical Education book: The BIG 4.

In July 2016, he was named to the Hudl 100 list. He has presented at IAPHERD, the top physical education convention in Illinois, on how to get students moving with his Games Galore presentations. He has also presented at the Chicago Glazier Clinics on quarterbacks & special teams. He was the Defensive Coordinator for the 2010 U.S. Women’s National Tackle Football Team, winners of the IFAF Women’s World Championship in which Team USA did not allow a point in three games with an overall score of 201-0. Stone has coached in the CIFL and the IWFL Leagues as well as Beloit College (Linebackers/Special Teams Coordinator) and Rockford University (Quarterbacks/Wide Receivers).

Stone has also coached football at the youth, middle school and high school level. He will be putting on fundamental football camps around the world in 2017. Please contact him to bring his “Back to the Basics Football Camp” to your organization.