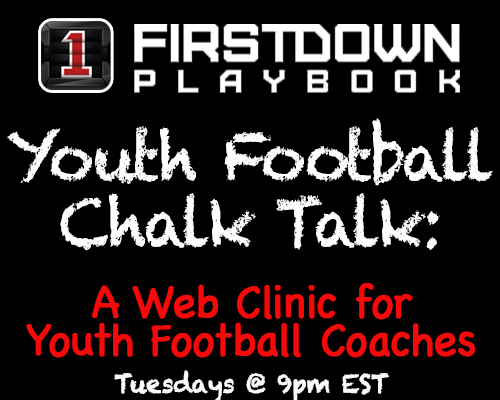 The FirstDown PlayBook youth football Split Backs formations is a close kin to the Jumbo formation that we introduced to you a couple of weeks back. The primary difference is that the backs are split instead of being stacked in an I backfield.

This subtle difference gives you some advantages when running some plays while it also gives up some of it’s effectiveness in others. The Split Backs formation gives you the ability to get out on the perimeter with either a sweep or an option attack. After all this formation is where the Split Back Veer comes from.

At the same time, it’s not quite the power formation that the Jumbo formation is because you don’t have the ability to get downhill with an inside lead run game. If you have a fullback type that is generally more comfortable being a lead blocker than with the ball in his hands then Jumbo might be the formation for you.

If you have two running backs with similar speed an talent and also a quarterback that can get on the perimeter in a hurry then the Split Backs formation is something to seriously consider. Finally, these two formations are so similar in structure that you can marry the two without confusing  your team and their assignments.

Today’s short youth football video looks at how you can incorporate the Split Backs formation into your offense this 2019 football season.

What makes this a great sprint pass explosive is that it comes off of an often run concept regardless of ...

Have A Bootleg Pass Pressure Plan

Pressure is not a good thing when you call a boot or waggle. However, a bootleg pass pressure plan can gi...